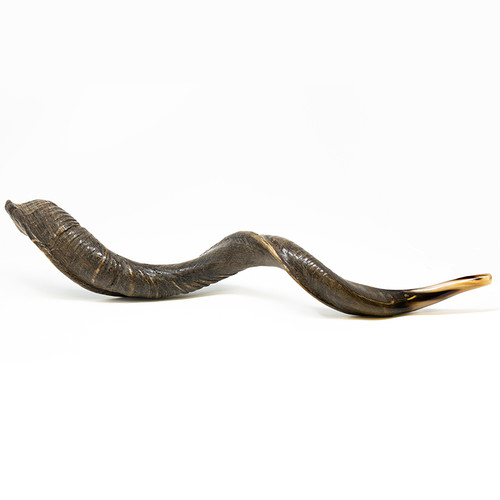 Displayed on it's side, The Large Yemenite Shofar measures about 36" long and 5" high. It weighs 1.85 pounds. This shofar is 100% authentic and kosher, manufactured and shipped directly from Israel. Manufactured under the strict supervision of the Israeli Rabbinate, each shofar is carefully inspected to deem it "Kosher." This means that it was produced in accordance with strict religious laws of the State of Israel.

The History and Biblical Significance of the Shofar

A Shofar is a ceremonial horn instrument used a few times a year, in accordance to ancient Jewish tradition. Shofars are usually created from ram horns, while in Yemenite Jewish culture, shofars are often made from the horns of the kudu – a type of large antelope. During biblical times, the shape and type of animal horn used to make a shofar were important. Horns could be taken only from a kosher animal, like a sheep or mountain goats, including the kudu. Shofars come in a range of sizes and types, lengths and shapes, depending on a community's tradition and may also be decorated with silver plating.

The shofar is possibly the oldest and most iconic Jewish ritual object. Made from a ram's horn, a male sheep that is at least one-year old, the Shofar is hollow and is blown in a special way that produces a sound. The Shofar is blown in the synagogue on Rosh Hashanah (Jewish New Year) and on Yom Kippur (Day of Atonement), when its distinct primal sound is used to awaken and inspire us to repentance and change.

Biblically, the Shofar was used in a number of settings. It was blown at the Holy temple, as well as for announcing holidays and the Jubilee year (Yovel). It has been used for many other things over the course of history, and now is a wonderfully significant piece of Judaica, commonly found in Jewish homes and synagogues, used during the high holidays.

The Shofar is one of the oldest wind instruments in the world and was used in the time of the Bible to intimidate the enemy, to declare war, and to call people to assembly. It was also blown during the times of Joshua to help capture the city of Jericho. “The army of Israel marched around Jericho to the signal of the Shofar” (Josh. 6). Jewish tradition links the ram's horn to the ram caught in the thicket and then sacrificed by Abraham in place of his son, Isaac (Gen. 22).

Your Shofar will arrive within 5 to 7 days. If you need it sooner, select rush shipping during checkout.

We want you to be 100% happy with your purchase. Feel free to return the bowl in new condition within 30 days of the order date for a full refund (less shipping costs).

Be Sure To Check Out All Of Our Gifts & Collectibles

We have something for everyone. Shop of all of our gifts & collectibles now.

A Child Is Born Serving Bowl

The Biblical Use of the Shofar DVD

Book of Hours Notecard (Blank Inside)