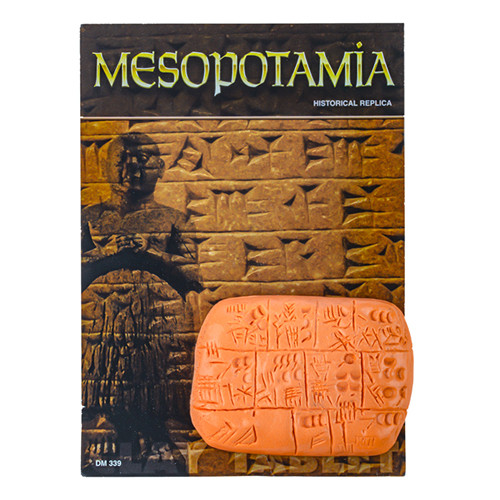 Around 3500 BC, Mesopotamia experienced the expansion of large population centers, and the city of Uruk surpassed all others as an urban center. Uruk is mentioned in the Bible as the city of Erech. Dominated by large temple estates, the city of Uruk needed better methods of recording, accounting, and dispersing revenues for goods and services. This need spurred the invention of writing in around 3250 BC. Using a blunt, wedge-shaped reed stylus (a cuneus in Latin), scribes made various impressions in the moist clay. Known as proto-cuneiform, this writing system was a mix of pictographs and numbers, but it quickly evolved into a system that could express any of the various languages of the ancient Near East.

This historic reproduction is an acrylic resin replica of an early clay tablet in the British Museum. Dated between 3100 to 3000 BC, this tablet records an allotment of beer to workers. Beer was the most popular drink in Mesopotamia, ant it was regularly rationed to workers for compensation. The symbol of beer, an upright jar, appears three times in this tablet. Alongside the pictures are five different impressions representing numerical symbols.

You can expect your tablet to be delivered in 5 to 7 business days. If you need it sooner, select Rush Shipping at checkout.

You may return the tablet in the original packaging within 30 days for a full refund (less shipping costs).

Have You Seen All of Our Replicas from Bible Times?

We have more historical replicas. Explore them all today!

He is Risen Tabletop Decor Plaque

The Making Of A Museum - DVD